A year ago, after an amazingly successful Twelve Days of Christmas swap in which I participated, I jokingly said, "Next time, why don't we have an Eight Days of Chanukah swap?" I, of course, promptly forgot about this idea until August when I was gently reminded about my suggestion. Hence, the first ever (that I know of) Eight Days of Chanukah Swap was launched. What a fun swap!

I decided to make a doll for each of the seven participants. 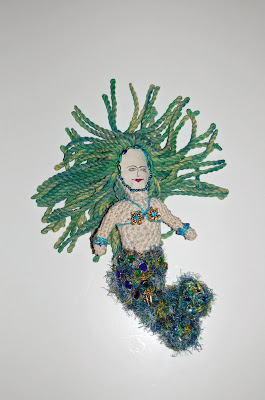 The first doll I finished was a mermaid for Joanne Thieme Huffman. Being a fan of Joanne's blog (see side bar for a link to her blog), I know she frequently uses mermaid images in her art. I decided to crochet her doll and then embellish her with some doo dads. Originally her hair was a mustard-green colored fringe, but I sprayed it with Color Mists which I had gotten from Aileen (Outside the Margins), and got just the perfect blue/green/gold color I wanted.


When last seen, Ms. Mermaid was swimming in Lake Michigan. 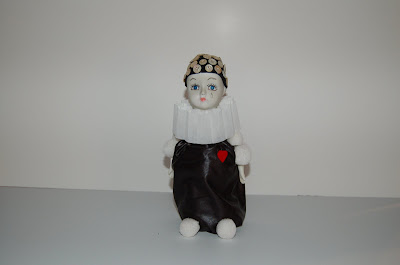 Next up was Connie William's doll. Connie happened to mention that her favorite colors were black, white, and red. Immediately I thought of making her a Pierrot doll. Amazingly, I had the perfect head and arms to use for this project. More amazing was that I knew where I had put them! I used a wonderful product called Apoxie Sculpt to attach the head to the base. I first fell in love with this two-part, putty-like product in Linda and Opie O'Brien's "Who's Your DaDa" class at Art and Soul '08. (More about Art and Soul in another post.) I used antique white buttons for the hair and a small piece of window shade for the collar.

Being a Chanukah swap, I decided to make Jewish Grandmother dolls for Sandee Hyde, Fran Saperstein, and Kara Klein. 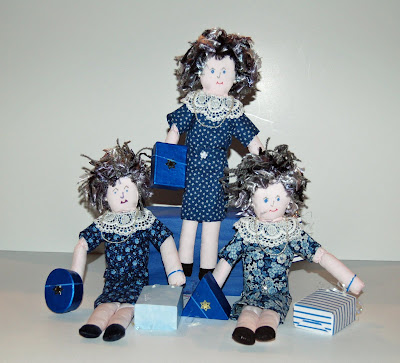 Here they are waiting at Newark Airport for their planes to leave so that they can spend Chanukah with their families. Being good Jewish grandmothers, their shopping bags are filled with food and, of course, they are bringing lots of presents. These are the first stuffed, cloth dolls I've ever made. I must admit, I think I have a new addiction.

I bought a copy of Knitted Babes because I liked the whimsical knit dolls on the cover. When making a doll for Joyce Vance, I immediately went to this book for inspiration and knitting directions since Joyce is the queen of knitting. This doll took on an identity of her own and became a ballerina. Joyce's daughter, Ellie, is a ballerina. I guess my subconscious was at work here. 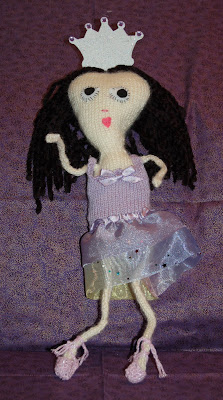 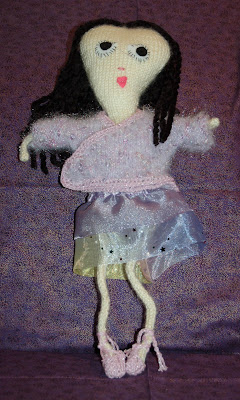 I could have spent the next month, knitting clothes for this doll. I think my inner child was just screaming to get out.


Last, but certainly not least, was the doll I made for Amber Dawn. I know Amber makes wonderful jewelry. When thinking about jewelry and gems, I thought about gypsies. I don't want to be accused of being politically incorrect, but Gypsy Girl had a velvet bag with her that was filled with jewels of an unknown origin. She arrived at Amber's home hoping to trade the jewels for a place to stay. The biggest challenge I had when making Gypsy Girl was her clothing. Not having any patterns for doll clothing, I had to remake the dress several times until I figured out how to get the top of the dress to fit her. 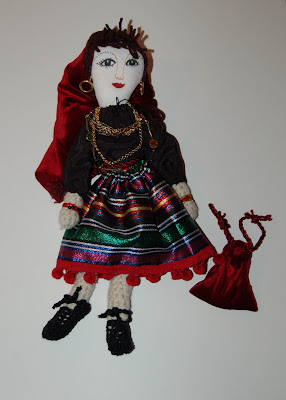 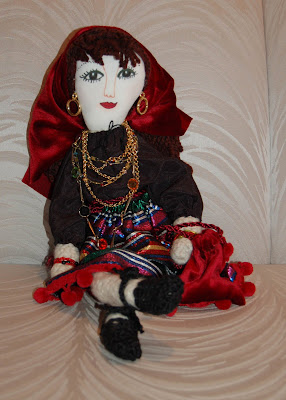 What a great swap. I had fun making the gifts I sent out, and I certainly loved the gifts that I received.