What's Behind the Curtain? 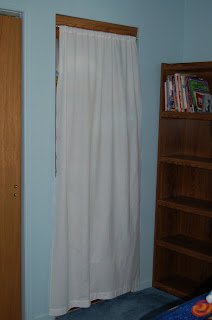 No, it isn't the Wizard of Oz. Guess again.

Hiding behind this boring white curtain is part of my every-growing fabric stash.

Let me explain. Years ago, this was my son's bedroom, and he used these shelves to store his games, books, record albums etc. Now it's the room my grandson sleeps in when he visits. Not one to let a nice set of empty shelves go uncluttered, I began storing fabric on them. At first, it was just a few pieces. Then I added a few more pieces. The next thing I knew, those shelves were overflowing with fabric. I just can't imagine how that happened!

Howie, who is usually not a neat freak, began muttering about the "room looking a mess (not the word he actually used)." I, on the other hand, thought the stacked fabrics looked colorful and inspiring. So we went back and forth about it. (Let me add, it was a rather loud and emotional type of back and forth.) Having been married for over 40 years, we've learned how to pull each others strings as well as how to rewind the string ever so nicely.

In the interest of marital peace, I decided to make a simple curtain to cover the shelves. That was easy. But I really didn't like the way the stark white curtain looked.

I wondered what could I do about this plain, white curtain. It occurred to me that I could dye that big, plain piece of white fabric. I had everything I needed and set about mixing the dye and letting the fabric soak. But then tragedy struck. Drum roll please. As I pulled my rubber gloves off, I noticed my right hand had turned blue.

Here's how the curtain look after it was dyed a lovely shade of blue.

I really liked the way fabric looked. But I'm not one "to leave well enough alone" as the saying goes. So I decided to try out the Setacolor Soleil sun printing fabric that I had in the house for a few years. This was back in August, and it was a beautiful, sunny, windless day. Perfect for sun printing.

This is a picture of some of the items I placed on the curtain after I had applied the Setacolor Soleil paint. 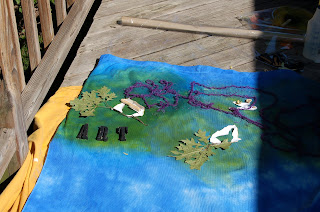 I was hoping to get some interesting shadowy images. . As with many of my artistic experiments, I was sorely disappointed. Here you can see how it turned out.

Here are the three things that I learned while doing this project. Perhaps this information will save you from screwing up like I did.

First of all, never try to sun print a huge piece of fabric. It was very unwieldy and I kept kneeling on my painted sections as I tried to reach the unpainted areas.

Second, the sun moves. Yup, one minute I was working in a nice, sunny spot and the next minute, the fabric was in the shade and I had to move the fabric which was a pain in the neck. I know this is basic science and I probably learned it in third grade, but for some reason I forgot to anticipate this phenomenon.

Third, trying to be clever, I had cut out cardboard birds and scattered them over the fabric anticipating I'd get some nice bird shadows and outlines. Well, this did not work out at all. I realized that my birds should have been much bigger. Can you see them? No. Neither could I. 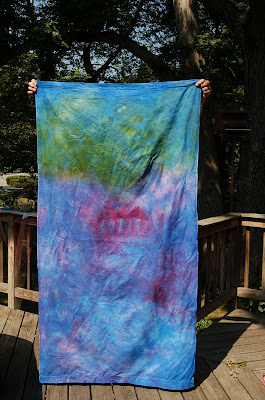 Well, to be honest, I wasn’t thrilled with the final results of my sun-dying project. But I'm not one to give up.